Support the Run for Kalusugan (Health) 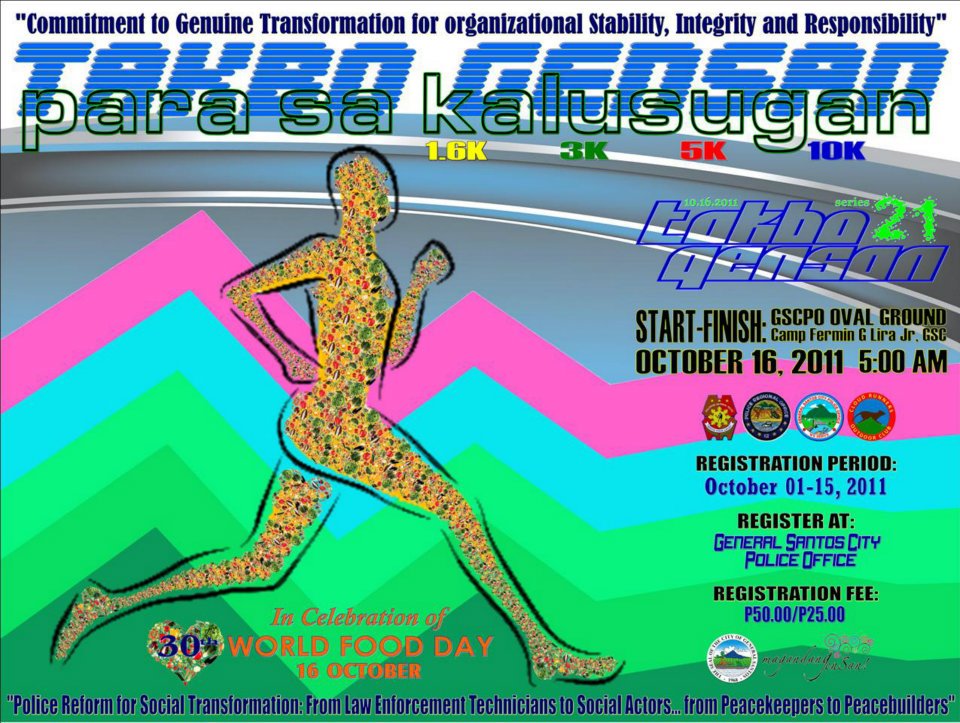 Food prices - from crisis to stability

Price swings, upswings in particular, represent a major threat to food security in developing countries. Hardest-hit are the poor. According to the World Bank, in 2010-2011 rising food costs pushed nearly 70 million people into extreme poverty.

“FOOD PRICES – FROM CRISIS TO STABILITY” has been chosen as this year’s World Food Day theme to shed some light on this trend and what can be done to mitigate its impact on the most vulnerable.

On World Food Day 2011, let us look seriously at what causes swings in food prices, and do what needs to be done to reduce their impact on the weakest members of global society.

World Food Day is annually held on October 16 to commemorate the founding of the United Nations' (UN) Food and Agriculture Organization (FAO). Each year has a different theme.

What do people do?

Many events are organized on and around World Food Day. On and around October 16, a wide-ranging program is organized at the FAO's headquarters in Rome, Italy. The program is aimed at leaders of political and non-political organizations at all levels and at increasing press attention on topical issues around food supply. Other UN organizations and universities around the world organize symposia, conferences, workshops and presentations of particular issues around food production, distribution and security. In addition, special initiatives, such as the “International Year of Rice” in 2004 and the “International Year of the Potato” in 2008 were launched.

Across the globe, many different events are organized to raise awareness of problems in food supply and distribution and to raise money to support projects to aid in the cultivation of food plants and the distribution of food. An example of this is TeleFood, which funds micro projects to help small-scale farmers at the grassroots level. The projects aim to help farmers be more productive and improve both local communities' access to food and farmers' cash income. Fundraising events include sponsored sports events, charity auctions, concerts, and marches.

The FAO aims to raise levels of nutrition across the globe, improve agricultural productivity at all levels, enhance the lives of rural populations and contribute to the growth of the world economy. It also provides assistance to countries changing their agricultural policy, to aid regions out of famine situations, to help implement appropriate technology and facilitate a neutral environment to discuss issues around food production.
At the FAO's 20th session in Rome, Italy, in November 1979 the conference called for the observance of World Food Day on October 16, 1981, and on the same date each year. The UN General Assembly ratified this decision on December 5, 1980, and urged governments and international, national and local organizations to contribute to observing World Food Day. World Food Day has been held each year since 1981
Posted by Rosilie at 8:21 PM